I had this dream when I must have been around seven or eight, and my sister Fran was about four.

In the dream we were in the house we grew up in. It was very early morning- neither night nor day. I was standing in my nightgown in the upstairs hall looking toward the top of the staircase. Little Fran was standing with her back to the staircase, lit from behind by a large glass wall, her arms raised over her head. She was on fire. A huge blaze.

I just stood, looking on with helplessness and horror. There was nothing I could do.

Of course as a child I had no idea that this might have been an aggressive dream – death wish toward my rival sibling. It was just what a dream is supposed to be – an expression of forbidden, unconscious hate, mitigated by love, and guilt. Although I didn’t understand it, it was a dream I could never forget. 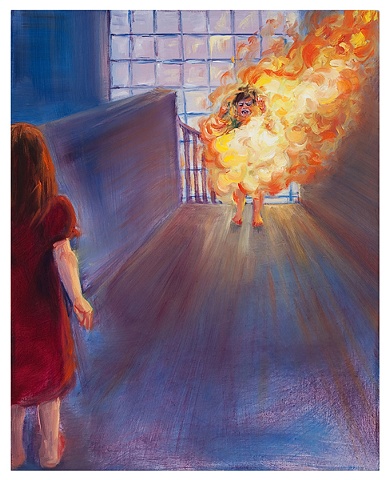