ok, if you want me to be super-picky about it: i lived in a neighborhood in San Antonio, there where houses to either side and across the street, their dark blank faces where part of the general atmosphere. There were no lights on in my house, the whole neighborhood is asleep. We did have trees in our yard, not in your exact placement, but in our front yard alone there were four trees of different types, a couple of oaks (i'm guessing) by the street (the block itself was generally tree lined, also the oak on the right side was basically 5 to 6 ft of trunk with some thick limbs sprouting out, but they were cut off quickly, I guess it was dead/dying, and the one on the left was actually just a stump now that I think about it, very close to the ground), a loquat tree midway up the yard (there was a slight downward slope from the house to the street) and a fringetree in front of the right side of the house, with maybe a pecan tree on the left ( all this left/right stuff is as one would view the house from the street) side of the house. There was a dinky little driveway on the right side, consisting of two concrete strips running from the street up to the back yard. To the right of the driveway where these sparse, 4 foot high bushes that ran halfway down to the street that separated our yard from the neighbor's. You got the basic size of the yard right, maybe a bit more length down to the street. No fence in front, there was a little walkway from the front door to the street, a little straight segmented concrete strip, there was a single step about 10 ft from the street, on account of the slope. I would walk down this strip to view the moon. The moon itself looked like the moon, with its little cold gray features with that halo that it has at night. The way it grabbed me would be more like a tractor beam, visible, but subtly, barely so, no hands. Looking at the piece generally, it's the space and light that seem off- my house and the entire neighborhood around it was dark, dark house, dark trees, no really long views (except if you were to look right down the street), with the lightest area being the night sky, which isn't that bright. the moon gave the area around me more of a cool surreal feeling- actually, I always thought Frederic Remington nailed it in his night paintings. you asked for it! I think the next email addresses me particularly, I'll do that one now...

So this apple-cheeked, plump little faggot is how you see me eh? Wrong wrong wrong! So as we discussed last night, no jamys. I would have been a little skinny kid in tighty-whities. I dunno how to describe my childhood body- skinny, colt-like? But I had a big round head, not plump, but a normal, skinny child's face with a big brown chili bowl haircut that emphasized the bigness and roundness. If I was giving the moon the ol' stink eye, my body would be rigid, hands down, maybe clenched, with all the anger in my face, being right on the verge of saying "fuck you moon!". If trying to make nice, there would be more looseness and a bit of movement in my body with a big sacharine smile on my face. I guess that's it! I hope this is helpful and not too overboard, it's funny how particular the memory gets when you think about it... 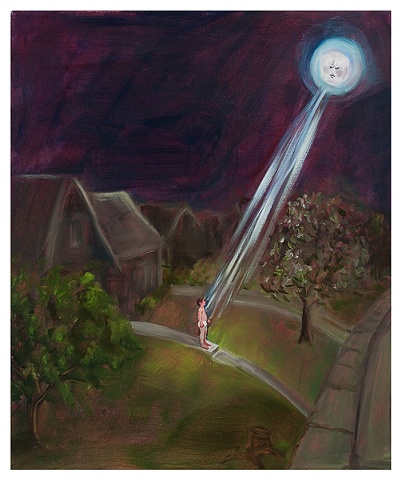